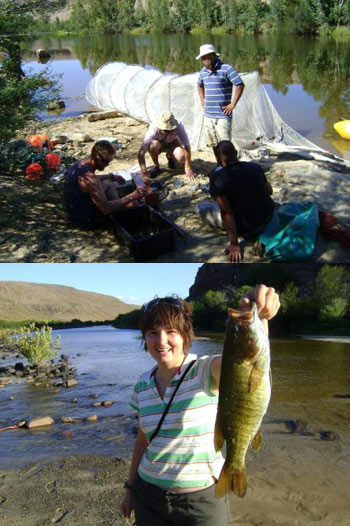 
It was with great excitement and anticipation that a group of established and aspiring fish scientists departed on a survey of the main stem Doring River during the week of 21-26 November.

Not only was there the promise of great scenery, sleeping under the stars and Bruce Paxton's camping cuisine, there was also some serious work that lay ahead. The Doring River had not been surveyed for almost a decade and there were several questions regarding the fish community of this fairly pristine river that needed answers. Following a very disappointing March 2011 survey for Clanwilliam sandfish (Labeo seeberi), we were desperate to find some healthy sandfish populations persisting amongst the wave of bass and bluegill that had slowly but surely overwhelmed the Doring River over the past 80-odd years. What followed however was not the happy story that everybody was hoping for. Four days of intensive sampling using mainly fyke nets and electrofishing and not a single indigenous fish! Then, on day five when everyone was losing hope of seeing the mystic sandfish, three adult fish were caught in a fyke net. These individuals were in a very healthy condition and had possibly spawned during the past spring.

There was also an unexpected surprise on the last day. While driving home from the Biedouw River valley near Wuppertal (close to Clanwilliam), a few small fish were observed in the Biedouw tributary. Some underwater photos taken by Riaan van der Walt, freshwater stewardship manager for Cederberg, revealed these fish to be juvenile sandfish. This indicates that despite the results of our sampling efforts, low numbers of spawning adults were indeed present in the Doring River. Sadly however, taking into account the numbers of predatory alien species present, very few of these juvenile fish will survive to adulthood. What makes the results of this survey even more distressing was an account of a farmer who we encountered during the survey. This gentleman had lived on the Biedouw River for many decades and told of the days when migrating sandfish were so abundant that the river turned a golden colour due to the masses of fish migrating upstream to spawn.

I'm not quite sure what it is about the Clanwilliam sandfish that makes it so special. What I do know is that the survival of this magnificent fish lies in the balance due to the short sighted and careless actions of earlier generations and that it is up to us, here and now, to intervene to ensure the survival of this species for the future. With this in mind, a conservation plan is in the process of being developed and will be implemented in 2012 in a collaborative effort between CapeNature and Northern Cape Conservation.

Review of Issue
Date: 2013-12-12
Below is an update by Martine Jordaan on the progress of the Doring River fish survey being undertaken by Bruce Paxton and the Cape Critical Rivers Team. Martine by the way, is recovering well after donating a kidney to her brother. Despite the Western Cape experiencing the wettest winter in a decade, a comprehensive survey of the Doring River was done in October 2013 in search of the endangered Clanwilliam sandfish. This survey was a follow up of work done by Dr Bruce Paxton in 2002 and a more recent survey in 2011 that was conducted to provide baseline information for the development of a biodiversity management plan for species (BMP-S) for the sandfish. This plan has been finalised and while not formally published in the Government Gazette yet, funding from the Save Our Species foundation to the Endangered Wildlife Trust (EWT) has enabled the implementation of many conservation actions identified in the plan. One of the listed actions is the need for more comprehensive surveys to determine current population status and distributions which resulted in this comprehensive survey. The most significant findings of the survey were as follows:  An increase in the numbers of sandfish caught in the main stem Doring and Koebee Rivers between the 2011 and 2013 surveys (6 vs. 60). This is likely a result of the timing of the sampling and illustrates the need for understanding the biology of the species in order to optimise the chance of detecting a rare species such as the sandfish.  Relatively large numbers of sandfish were also caught at the Bos river confluence.  Unconfirmed reports of sandfish and yellowfish in the upper reaches of the Tankwa River.  The presence of large numbers of juvenile sandfish (Aug/Sep spawned) in the Biedouw River.  Very few sawfin and no yellowfish were caught, again illustrating the deleterious effects of the resident alien fish community. What all this suggests is that we still know desperately little about this fish and the processes at work in the catchment itself. The importance of the Bos and Tankwa rivers for sandfish warrants further investigation. It appears the sandfish are utilising the Biedouw  a seasonal tributary  to make spawning runs during favourable years in Aug and Sep. The absence of certain age classes suggests a boom and bust life strategy. This, combined with the use of seasonal tributaries, appears to be keeping the populations ticking over where yellowfish and sawfin have all but disappeared from the main stem. While there is still a significant lack of biological data for the sandfish, as well as the environmental data to support it, the results of the past survey has contributed to an improved understanding of this species and its requirements, which will in turn contribute to its survival in the wild for many years to come. The establishment of the Cape Critical Rivers project team, assisted by partners who include DENC, Dept. Water Affairs, CapeNature and the EWT, has also illustrated the increased effectiveness of shared resources for making a difference in the sphere of aquatic conservation in the CFR.

Review of Issue
Date: 25th April 2020
For the latest update on the Save the Sandfish project go to https://www.fosaf.co.za/documents/Saving-Sandfish-Project-update-15-March-2020-YWG.pdf