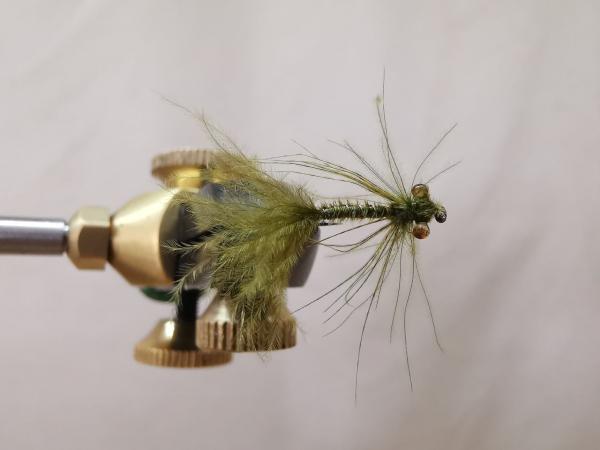 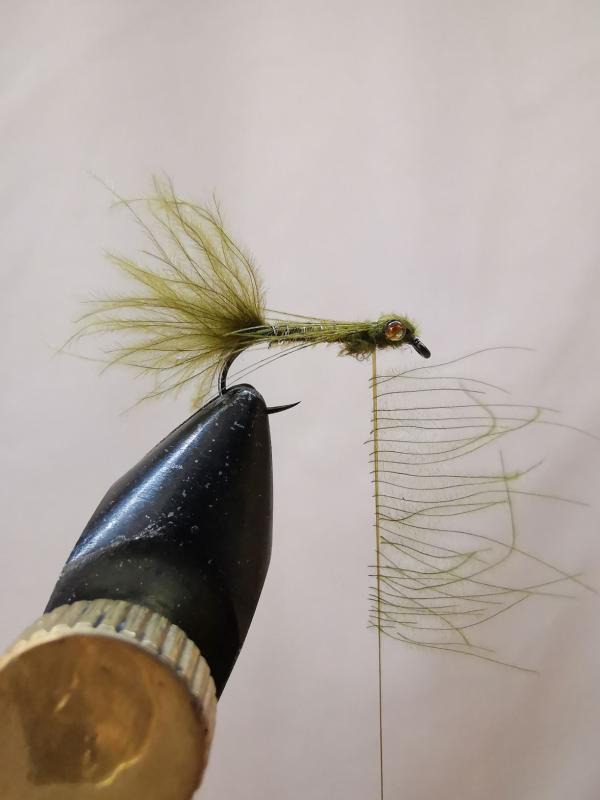 I consider myself to be an enthusiastic intermediate fly tier with much still to learn.  I have been tying flies for about two years now in my spare time (of which there isn’t nearly enough!).

Credit to Murray Pedder for his fantastic pattern that has been the inspiration for my go-to fly since I started fly fishing.  Find the video for the original pattern here: https://www.youtube.com/watch?v=my19VO4sHaA

as very much a newbie, both to fly fishing and fly tying, about two and a half years ago, when I discovered the above YouTube video by Murray Pedder.  His pattern was delightfully simple and used very few materials, and as such appealed to my rather green fly-tying skills.  I tied a few and at my next visit to some or other stillwater, I tied one on my DI5 sinking line, and made a cast (not even a very good one back in those days).  I let it sink and did a slow, twitchy, figure-of-8 retrieve.  Not even a third of the way through the retrieve and I had a take, landing a nice trout.  I caught a good few fish on that same fly that day, and I haven’t looked back since.  I have tried it out in just about all situations, and on all line types.  Against all conventional logic, I have found I have much more success using the fly on a fast sink line, using a slow figure-of-8 retrieve with many pauses, rather than the more frequently employed retrieve on a floating line.  I have caught trout, bass, carp, kurper and even smallscale yellowfish on this fly.  It is a fabulous fly to try when fish are being particularly leery, as it is a very natural-looking mimic of the natural damselfly. 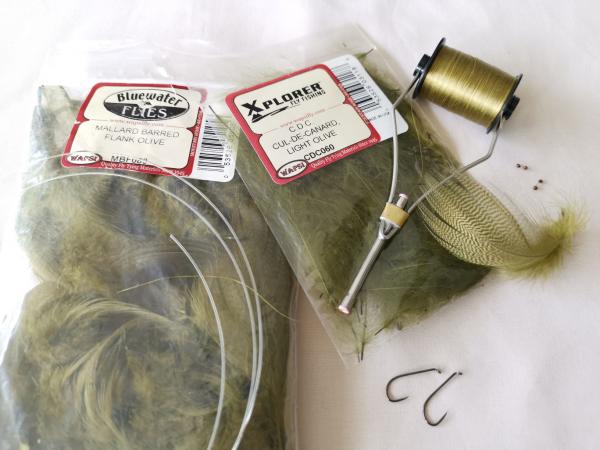 Eyes:  “Mono eyes” made with 35lb Maxima Ultra Green, melted with a flame to desired size 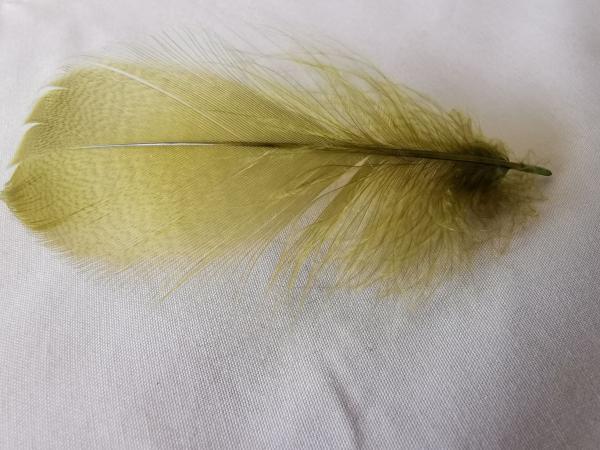 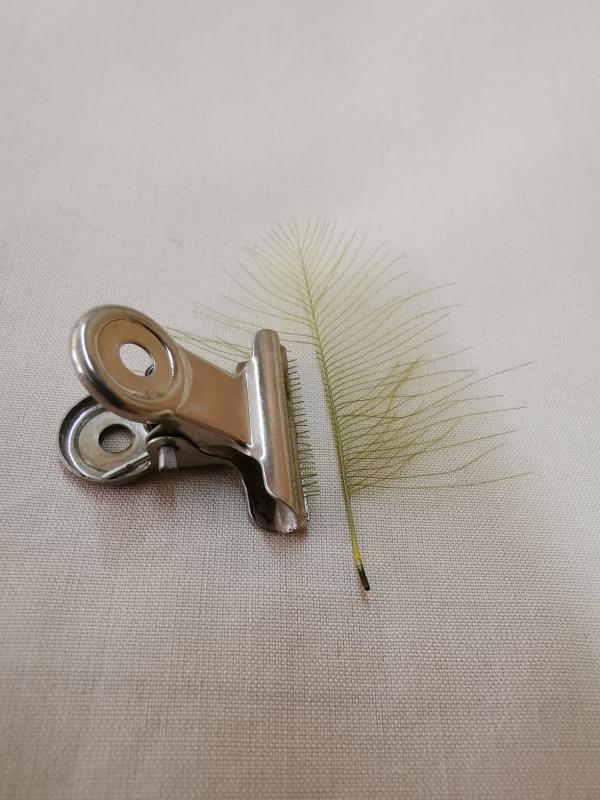 Step 1: Tie on your olive thread leaving about half a hook eye’s length of “no man’s land” behind the hook eye and tie in the mono eyes, using a firm figure of 8 thread pattern.  Secure with super-glue if desired.  Lay down a thread base down the remainder of the hook shank.  Stop just before the start of the bend of the hook. 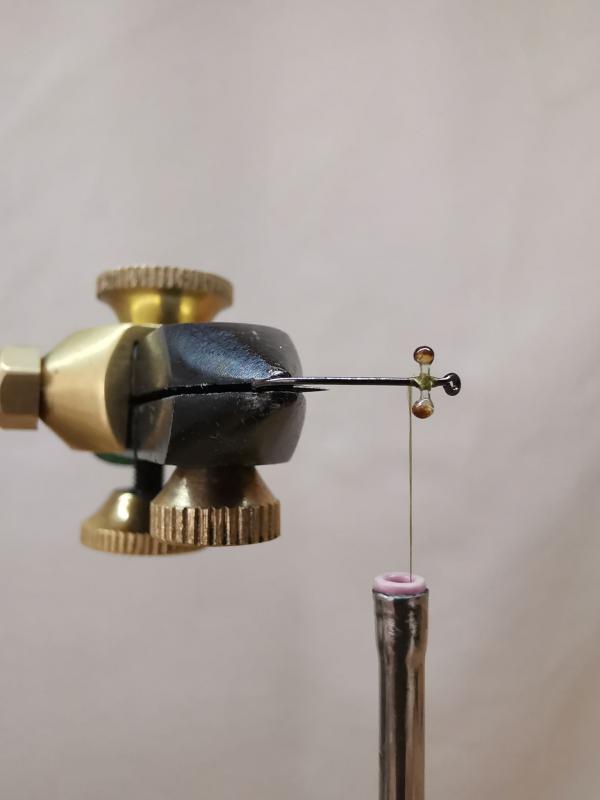 Step 2: From your Mallard feather, grip a good pinch of the longer “Marabou” fibres close to the feather shaft at the butt end.  Select fibres that are at least one and a half times the hook shank’s length.  Tie these fibres in on top of the hook shank and tie down the butts securely.  Advance your thread back to the tail tie in point, then tie in your ribbing wire, and advance the thread back again, to the tail tie-in point. 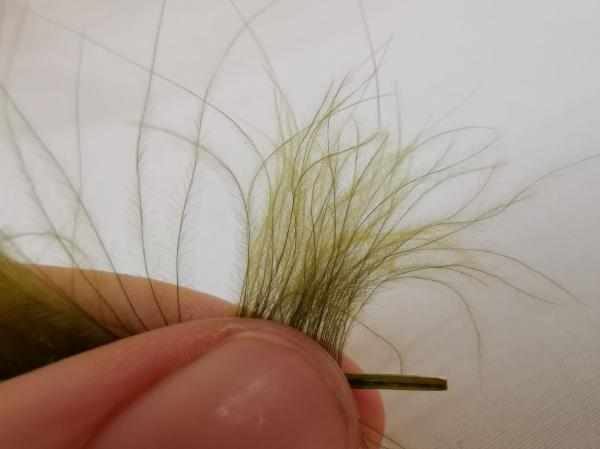 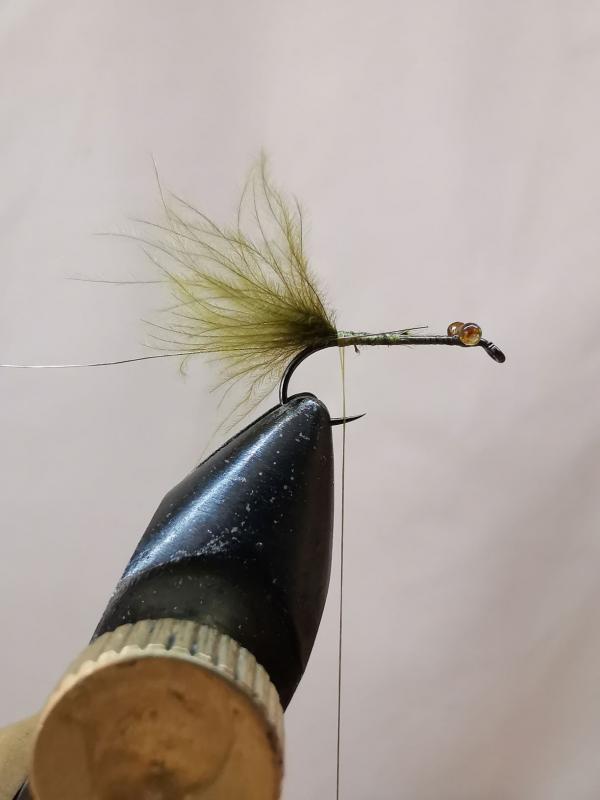 Step 3: From the longest fibres of the Mallard feather, select about 5 or 6 fibres and strip these from the feather shaft.  Trim the tips of the feather fibres and tie them in by the trimmed tips, at a 45 degree angle, with the shiny side facing you.  Wrap your thread forward to just more than half way up the hook shank, building up a smooth parallel body to even out the taper caused by the tie-in of the materials if necessary, leave your thread, or, if desired, do a single whip finish to secure the thread. 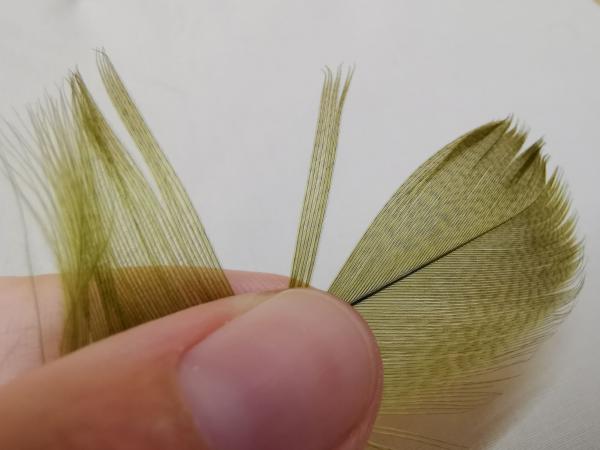 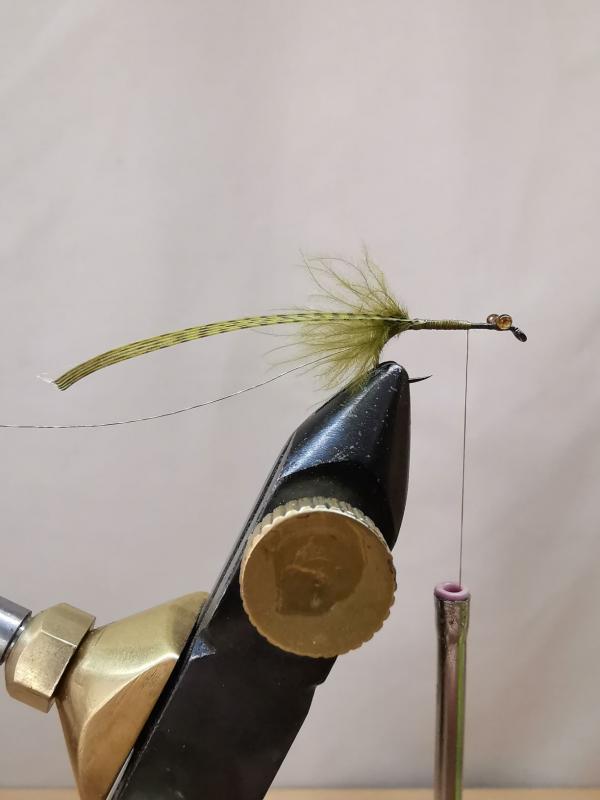 Step 4: Gently wrap the Mallard feather fibres forward in touching turns until you reach the position of the tying thread.  Tie in securely and trim the excess.  Counter-wrap about 4 or 5 open turns with the wire, and tie in securely.  Trim off the excess. 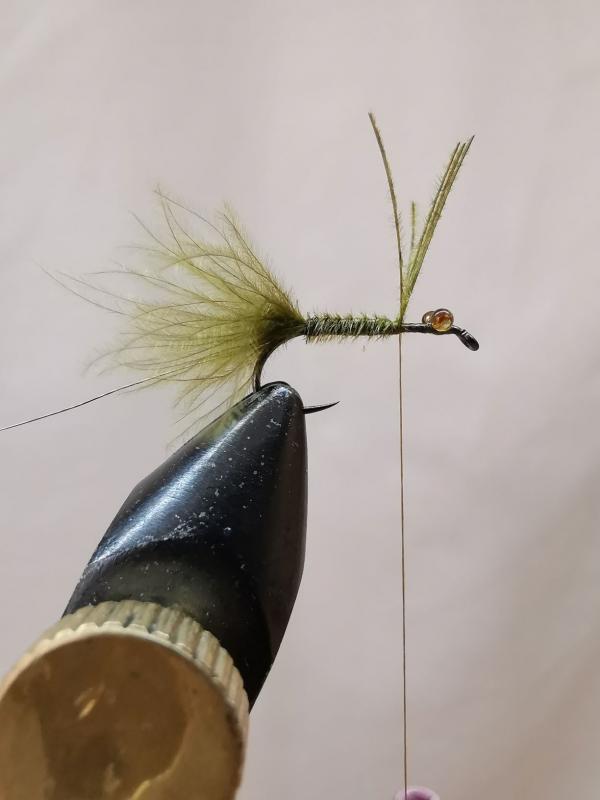 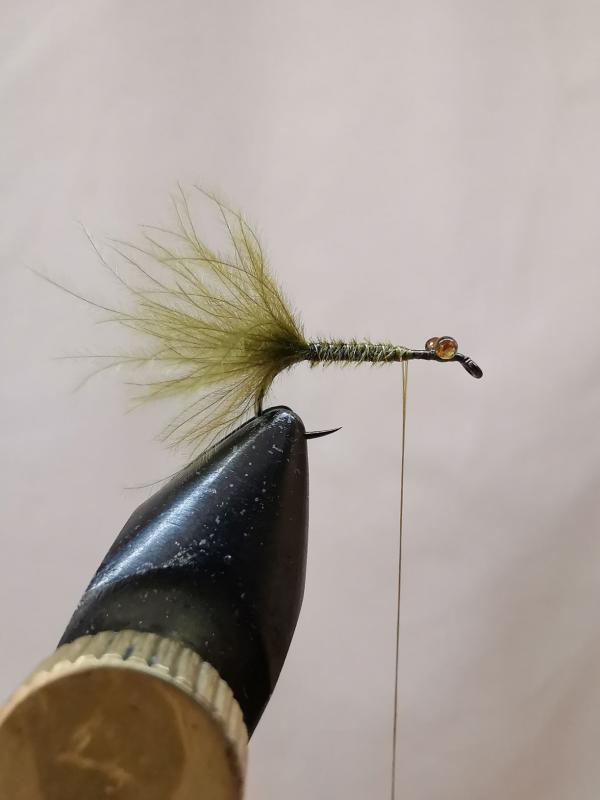 Step 5: Select 10 to 12 fibres from the Mallard feather that are medium to long in length, and have good barring on them.  These are going to be both the wing case and the legs of the damsel nymph.  Measure from the fibre tips the length of the tie in point to be about three and a half times the length from the back of the hook eye to the current position of the tying thread.  This step is important, as it determines the length of the nymph’s legs after the tying is completed.  Tie these fibres in on top of the hook shank at the measured position.  The fibres should be positioned shiny side up, with the butts facing the hook eye.  Try not to let the fibres all bunch on top of the shank, but fold them part way around the shank of the hook.  Tie them in wrapping forwards until just behind the eye, then trim the excess and wrap your thread back to the thorax tie-in point. 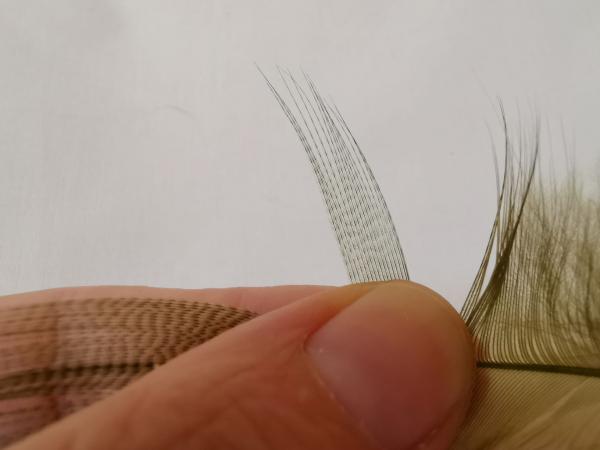 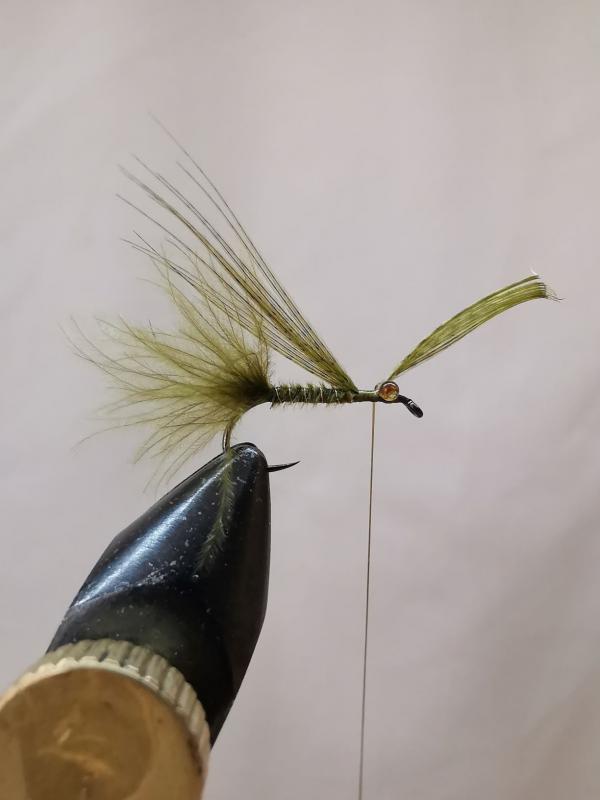 Step 8: Fold the mallard fibres over the top of the dubbed thorax and tie in just behind the mono eyes.  Wrap the thread to in front of the mono eyes then fold the mallard fibres over the eyes and tie them in again there.  Do not tie too far in front of the eyes.  Dub a very thin noodle with some more “mallard marabou” fibres, and then wrap around the eyes themselves, in a figure 8 pattern, leaving the thread behind the mono eyes again. 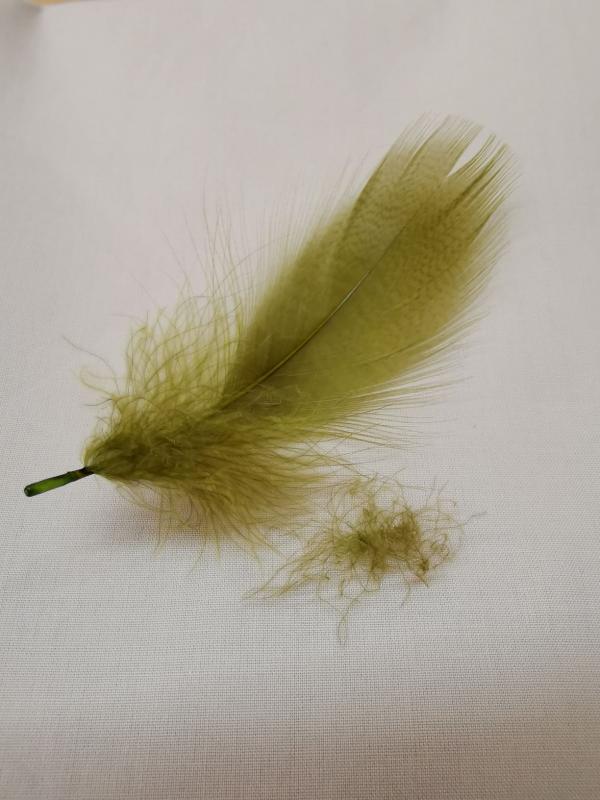 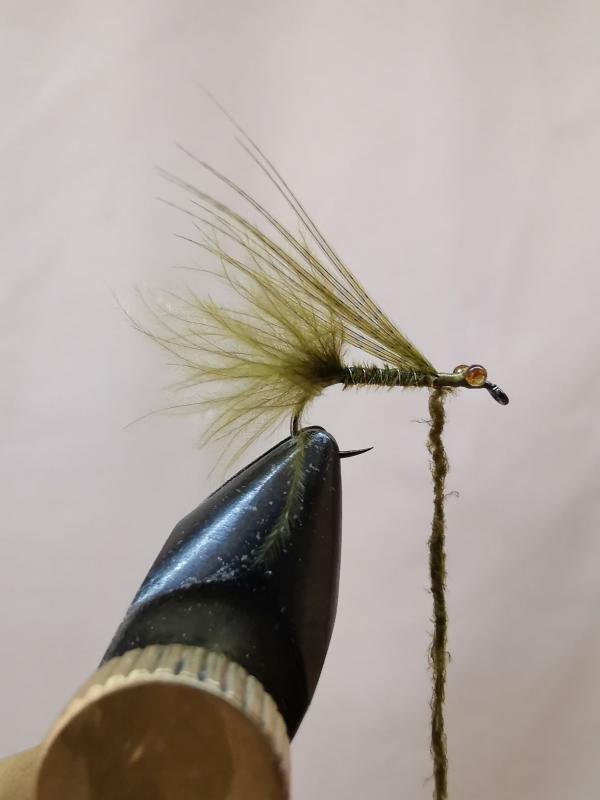 Step 9: Gently fold the mallard feather fibres back again, over the top of the eyes, and try and separate them equally, tying in half of the fibres on each side of the hook shank, just behind the eyes.  Use as few wraps as you can for this.  Do one whip finish to secure the thread. 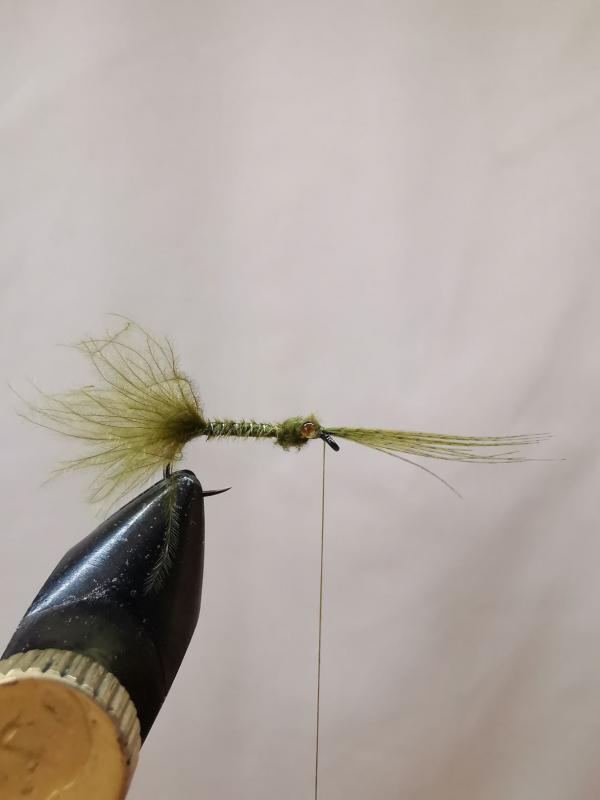 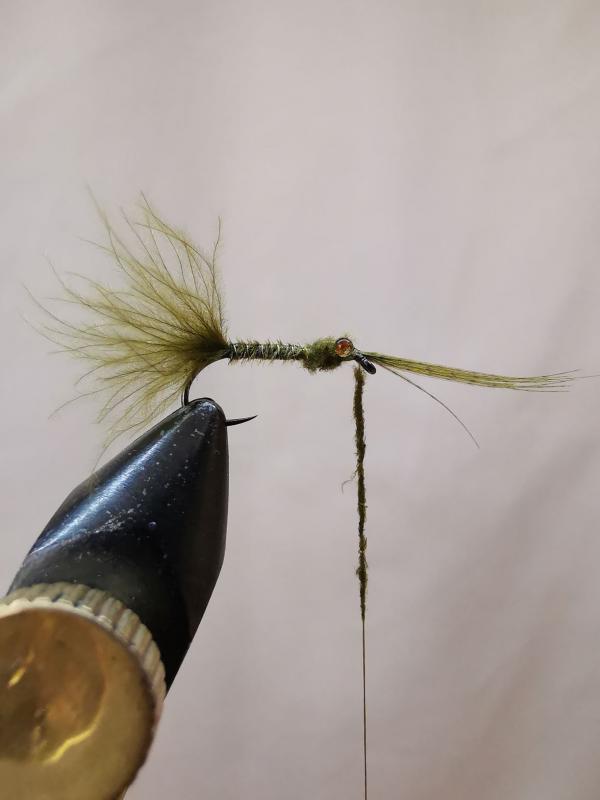 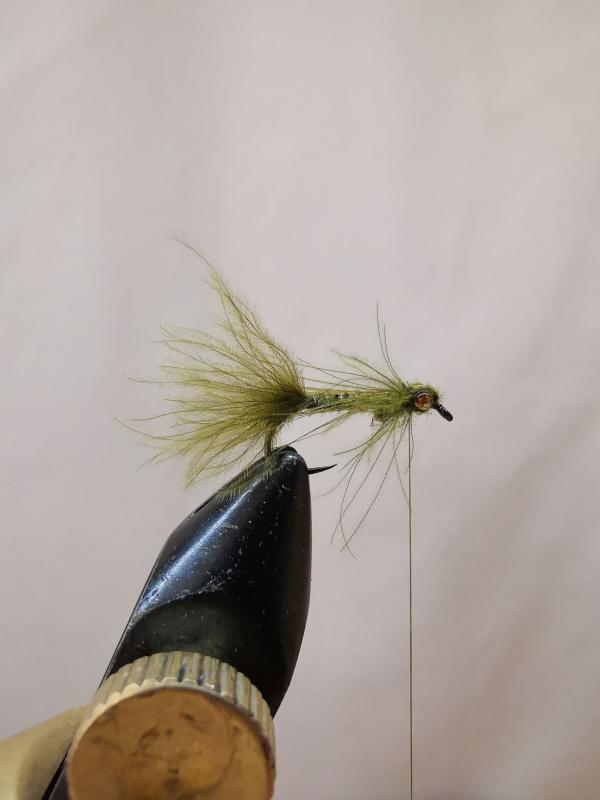