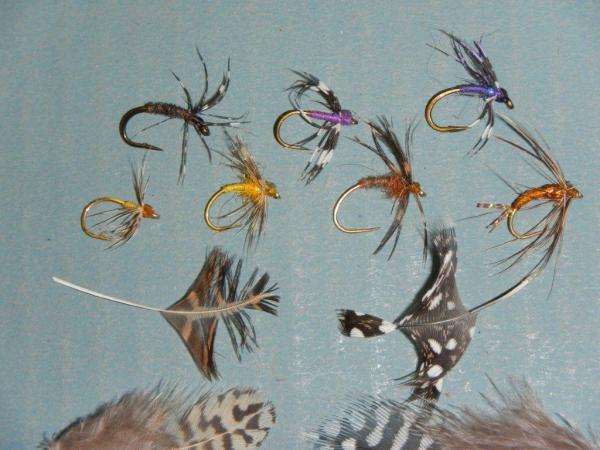 The aim of this article is not so much a specific recipe but more a generic one, using the soft hackle design with the emphasis on improvising with locally-gathered materials. Many of us have been too much in awe of Northern Hemisphere feathers and fur whilst not thinking outside of our tying boxes and using what is available right on our stoep steps. I love all my pheasant, snipe, starling, partridge and the like whose feathers I have gathered over the last half century stemming from my youth in England.

However what local birds and feathers can we gather and use, especially experimenting beginner fly tiers, without breaking the bank in these hard times?

This last Sunday we had our first drizzle of the year here in Jozi. As the barometer was forecasting gloom and doom I decided to traipse around my local school club dam and pick up some feathers left from the local bird life. I managed to come away with guinea fowl, mallard, Egyptian Goose, hadeda and sundry duck feathers. In addition, in order to create a more exotic Mzansi look I also dug out from my fly tying room a Woolies bag worth of Greywing Francolin feathers that my Eastern Cape wing shooting mate had kindly given me. For soft hackles the female bird plumage is usually softer but less colourful than that of the male. The feathers on the neck, chest and 'coverts' are ideal as the hackle for spider flies. A few fibres from the primary and secondary wing feathers of larger birds such as the hadeda and Egyptian Goose make wonderful 'quill' bodies.

I've taken the soft hackle fly AKA spider design as an example of what can be done using random feathers.

1) Hook - typically sizes 10 to 16. Ordinary caddis pupa shape hooks are good. Heavy or light depending on the depth and manner of fishing. Optional

2) Tying thread - you can use standard thread of any colour to suit.

Pearsalls Gossamer is the traditional silk one but you can buy good silk or cotton thicker threads at your local haberdashers. Gutermaan in particular

do a great silk thread in a myriad of colours for a reasonable price.

You can of course get 'Step By Step's off the internet and space does not permit showing same here. You must tie the flies thin with sparse hackles.

One or two turns is sufficient. If you put on too much hackle you can always break off the surplus.

Often your soft hackle feathers will be too large especially if you are tying 16s and smaller. In that case there are several ways to ensure the hackle is in proportion to the hook. The simplest if you are starting out is to strip off feather fibres and tie them in on top and bottom by the head as you would a false hackle. Never cut the hackles at their tips as you then lose all movement in the water.

The scraggly feature of these flies is what makes them so attractive in the water. Fished upstream they resemble any dislodged midge, mayfly or caddis.

Fished downstream the feathers tuck in to the body giving a streamlined rippling nymph look especially resembling swimming baetis nymphs. They are also versatile in that you can fish them on or in the surface. Mid-water to just below the surface they can imitate emerging or swimming nymphs/pupae or even indeed drowned insects of many species. And fished with a bit of weight on the bottom they can imitate all the nymph and larval life there. Try and fish them upstream dead drift and downstream the same but with a bit of 'mending'. In stillwaters they are a killer on the top dropper as a hatching 'Buzzer' (midge pupa) imitation again fished dead drift in the dam currents.

Remember there is no such thing as a too-ugly soft hackle fly so enjoy tying and fishing with your home town bird feathers! Works equally well for both trout and yellows

As the francolin feather is so useful in many general situations maybe 'General Franco' for short for any fly tied with same be appropriate. Or again, maybe not! 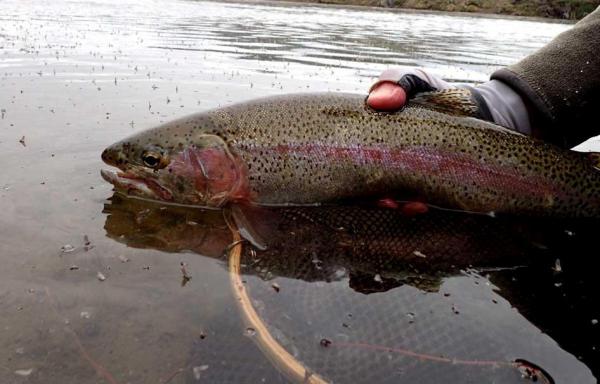 A rainbow and many others caught on the francolin/orange combination fished sub-surface during a heavy baetis hatch.See flies on the water.